Well, Cardfight!! Online Closed Beta has been in my hands for about… 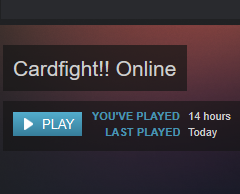 … That’s not a lot of hours, considering how hyped up I was about this game. But hey, I got a lot of gameplay in, right in between editing videos and planning for recording sessions for this week’s upcoming releases for the Granblue Trial Deck and GBT06.

So as I wait for the latest maintenance to come off, here are my first impressions of Cardfight!! Online, so far…

In a one-line summary, so far, so good. 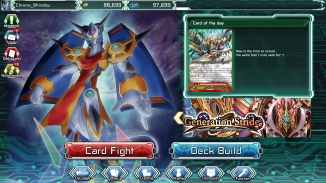 My game screen on the left, the promotional picture on the right.

The game looks great. It is as what was advertised during the hype build up to this game. 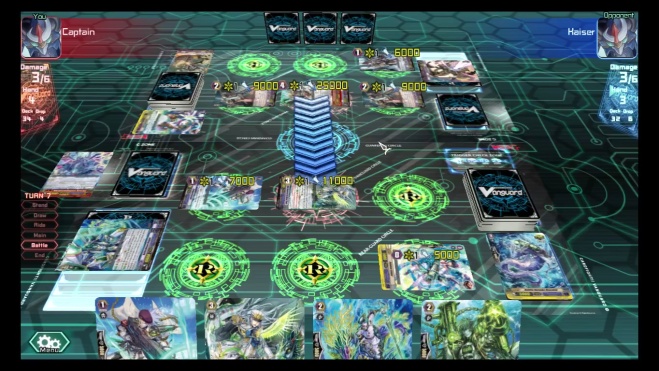 Dempster, be proud of me! My first win was with Thavas’ trial deck!

I made an earlier criticism about fight information like player hand sizes and number of cards in the deck and drop zone being to the side. I have to say that I didn’t mind being proven wrong about that. I spent most of the time looking at the field and planning my next move than wondering those small details, which I could pick up at a quick glance. Font size could be a little bigger, but it does its job well.

The cards are clear and accessing their information by right-clicking them in the menus and cardfight is made natural to the player. 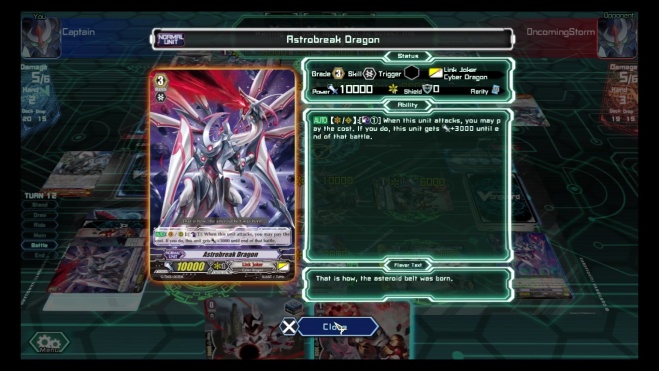 Clear information that I need to see well enough.

They even included the tiniest of details that, when noticed, is quite amazing to see. With the first gold coins I received, I bought myself a sleeve from the shop. I went and equipped the sleeve on, and the small detail of a white/grey border around the card was visible. It was a realistic depiction of a card sleeve being used in a deck. So when you use a sleeve, you’re really putting your cards into that sleeve. What I thought at first was a graphical error turned out to be more than just a picture slapped onto the back of a card like a skin.

The hand may be bad, but the sleeve is oh so good!

The gameplay is very solid so far. As far as I have played, there has been no problems with the turns of the game. Every step is not missed out at all, and aside from a hiccup or two in regards to rulings and aesthetics due to bugs, the game system is very solid.

The online component is great, it’s rare that I encounter a player who disconnects mid-battle, so it’s a solid net code. Though I have to point out that if your own connection isn’t strong, you may end up disconnecting mid-fight. 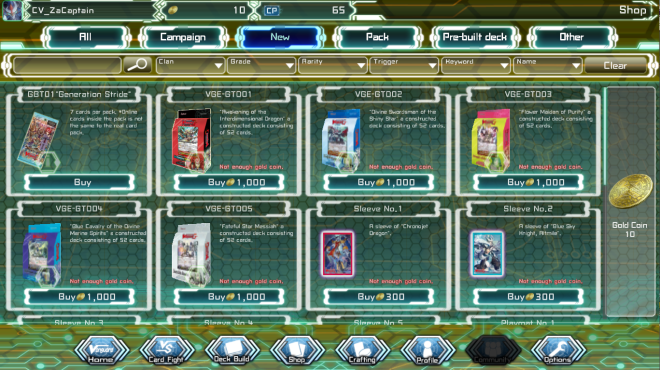 A little shopping for your needs!

The shop, while limited currently in the closed beta, is easy to access and filter. Everything is sorted in their categories and it’s easy to click a tab to find what you are specifically looking for in the shop, from booster packs to trial decks to sleeves and avatars.

The packs are different from real life, in that you get 7 cards in 1 pack, with 1 being Rare and above. You’ll definitely have a lot of commons coming in, but the game is smart and automatically disenchant your extra cards into CP.

Ahh, the crafting page. I’ll see you every pack buy!

The crafting UI isn’t the same as the shop where cards are not so sorted well enough. There’s so many cards in the closed beta, some with different rarities, that it’s already a bit of hassle to find the card you are looking for to craft or disenchant into CP. Definitely way too many for the filter to work as robustly as it did in deck build and shop, and it’s only going to get worse when more cards are introduced into the game.

There needs to be a better system in play. Case in point being that I never knew that there was Aqua Force and Link Joker promo cards that I could create. I only found out when I happened to filter for PR rarity cards only. Boosts for those two clans start in GCB02 and GBT03, respectively. Because I didn’t know I could craft Dark Metal Chameleon for my Link Joker deck, I ended up crafting Atmos instead. Only because it was sitting between Arborea and Altmile, as a Grade 4 G unit.

All that aside, it is still nice to be able to specifically craft the one card you need, instead of grinding quests and testing your luck everyday on packs, hoping you find what you want. Granted, the higher rarities are a little expensive, but there was mention that tournaments reward players with CP as well as gold coins. So maybe the cards you are looking for is just a release date away.

(I don’t have a screenshot of either the shop or crafting pages. But I will update the blog with them soon)

Originally, when you wanted to challenge, say, a friend. There used to be a limited number of challenges that you could do a day. But after the maintenance patch, it was removed, and we even get notifications on when we are challenged.

Gee, I wonder who that could be?

The daily quests are challenging, but fairly rewarding for the time you put in for them. It’s always hard to earn enough through playing, so the quest system is a very welcome and naturally fitting addition to the game.

While I understand the inevitable fate that is to come, I like that you could challenge your friends to clear your quests. Sure, it does open the door to win trading, but I don’t mind it either way if they fix it or not. Earning 300 gold to buy yourself a pack isn’t easy, but it gives the space the game needs to give to players, so they don’t burn themselves out of the game on day three. Like I said before, the quests fit naturally into the game and they may be tough but rewarding. So far, the only challenging one I had to clear was defeat 7 rear guards for 200 gold coins. Not a bad challenge for good coin, I’d say.

The criticism that I really have with Cardfight!! Online mainly revolves around two things. Clunkiness and consistency.

When you type in the game for, let’s say, renaming your deck name. I can’t type at the normal speed I usually do, so there is a cutoff point for when it can’t register. Half the time that happens, you think there is a character limit, when it actually is client-to-server lag. It makes typing in stuff clunky.

Then there’s the buttons, which, when you press it, sometimes doesn’t register as a button hit. There is the pros and cons to consider when deciding on whether or not the button activates on click or on click-release, if you get what I’m saying.

I am completely theorising here by saying that it may be because there is a memory leak somewhere. It’s still closed beta and the purpose of the closed beta is to learn from people what kind of bugs are still in the code and squish them. I don’t have definite proof that it is. It could be because my game window minimises whenever I use another program that causes it. (I have a second screen by the way) I don’t know. But that leads me to another thing about clunkiness, which is a lack of various resolutions and a windowed fullscreen mode.

Currently, there is full screen and windowed mode, but not a windowed fullscreen mode, which makes it a little frustrating for me, when I did my livestream. Because it is in fullscreen mode, the game window minimises down to reveal my desktop, even though I had my program up on my second screen. There’s also not a lot of various screen resolutions available. Currently I have 1024, 1360 and 1366, all by 768. (The last one is my max screen resolution.), and what’s funny is that it is the game itself that changes, not the window, so you will see black borders around the game when you change resolution.

Another thing about that is that when I first launched Cardfight!! Online, the game was set just nicely in windowed mode that fills up my entire first screen, without me needing to adjust my window or anything. But when I changed my game resolution. I could not reset it back to the original window size that it once was. So it forces me to fullscreen mode, and that’s when the lack of a windowed fullscreen mode becomes something slightly more important than what it was once before.

Now, in terms of consistency, I refer to the gameplay. I’ve been playing Link Joker a lot, and when they prompt you to counterblast or soul blast, they pop up a screen for you to choose your cards to blast with. But when you get a heal trigger, and you are able to heal, where was that pop up?

Actually, my gripe isn’t the lack of a pop up for healing. The problem I have is that half the time I’m playing and paying counterblast costs, I’m actually clicking on the card in the damage zone to select it for counterblast, and then realising that there is a pop up for that. Not only that, but there is inconsistencies with choosing your rear guards too. In one scenario, you get a pop up for when you need to choose a rear guard, but in another scenario, you choose a selected card on your field, and even then, it’s hard to see if what you have selected is really chosen.

They should just keep the pop up in specific situations that deals isn’t clickable on the field, like at the start of the game when you choose the cards you want to return back, when you G assist and reveal the hand to your opponent or when you soulblast. Counterblasts and unit choice should being selected on the field when the time comes to use them.

The clunkiness and consistency are the major ones for me that brings the game down a bit. The other minor problems include the aforementioned hard-to-see selection border, tooltips on buttons in the menus so that we can know what they do, as well as some suggestions to make the game a little more user-friendly, among other stuff.

But overall, the game is solidly built and is refined for a closed beta stage release. They learnt from what’s already out there. Hearthstone, the 3DS games, you can see what they clearly learnt in the game’s presentation. If the speed of the fight could be hastened in terms of the speed of the data being sent from client to server, the game would be much better, among other fixed issues, in my opinion.
Cardfight!! Vanguard looks like it can shine well on Steam, and with any luck, it can bring eyes to more people around the world to the game. Cardfight!! Vanguard is fun, as I’m sure most of you will agree, and I’m glad that it being on Steam will open more eyes to that.

After all, the game is not celebrating it’s 5th anniversary for nothing, am I right?

I give Cardfight!! Online’s Closed Beta a Perfect Raizer/10 for its strong presentation. Despite its shortcomings, it can only be improved further in its lifespan. I only hope that it does once the game is released.
(Real rating: 8.5/10)

If you have anything to ask about Cardfight!! Online, be sure to leave them here in the comments for us to answer. We’ll do our best to answer them.

Now if you’ll excuse me, I have a Victor deck to try and build up, once the game comes off maintenance.

Stand up, my Vanguard!
– Captain