On September 29 I made a post announcing Cardfight!! Vanguard – Stride to Victory!!. Now I’m here to give you guys more information and updates! Thanks to Josephine for telling us about the updates! 😀

First of all, many people have been wondering what they can do with their copy of Lock On Victory!! and all the the cards they’ve accumulated within. The good news is that you can import all your cards over to Stride to Victory!!, including deck profiles so you can use them immediately in this game like as if you’re continuing a saved file! So for those who have a deck they love and aren’t willing to part with it, don’t worry at all because you can carry it over and your bond with it will be here to stay!

Stride on Victory!! will also contain up to 3800 different cards, with boosts going up to as far as G-CMB01: Vanguard VS Deletor. Being a huge step up from Lock On Victory!! that only had 2400 cards, players can now use newer cards to boost their older deck builds like Alfred to be able to use it effectively, just to name a few!

A total of 10 new characters have been designed to be your protagonist in the game, and along the way you can switch between each of them as you please! Starting from the top in order from left to right, the characters are Izumi Keisuke, Sakura Yui, Tachibana Atsushi, Kusakabe Ann, Hyuuga Masato, Hanashima Kirara, Hyoudo Ryuuto, Mizuki Yukino, Narukami Aki and Amane Alice. Some of the voice actors here have had previous roles in either Cardfight!! Vanguard series or Future Card Buddyfight. The more prominent ones are Hyuuga Masato (CV: Miyano Mamoru), who also voices Ibuki Kouji and Hyoudo Ryuuto (CV: Sugiyama Noriaki), who voiced Morikawa Katsumi, just to name a few. 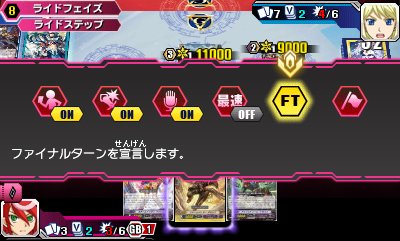 Perhaps one of the biggest additions (and possible the most ingenious) is the ability to declare a Final Turn. Long time Vanguard fans should be very familiar with the term, and even if you’re not a long time fan, it should be quite obvious as to what it is. However, instead of just something that you can show off, this Final Turn has a secondary function. If you end the game on the turn that you declare a Final Turn, you’re rewarded with extra points. That means more packs to buy in-game!

That’s all the updates I can gather up for now. Special Thanks to Josephine for helping me out with this update, and let’s all look forward to Stride to Victory!!!